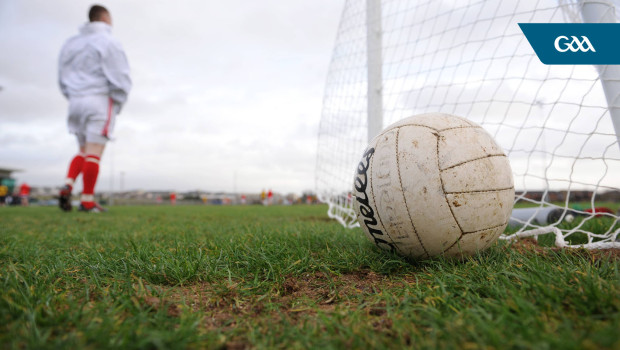 Lavey U14 footballers bounced back from Féile final disappointment with an emphatic league win over Dungiven.

Following a keenly contested U13 final between the teams last autumn, acquaintances were renewed in near-perfect conditions, resulting in an opening half with scores at a premium.

The visitors registered the first point after seven minutes of the game which saw both sides waste several scoring chances. It would be the first and only time they would lead, as points from James Crawford either side of an Enda Downey free gave Lavey a 0-03 to 0-01 half time lead.

Lavey’s domination of possession and territory during the opening twenty-five minutes wasn’t reflected on the scoreboard, giving a battling Dungiven side much encouragement.

However, the opening stages of the second half saw daylight introduced between the teams as Oran Downey pounced to poke to the net from close range following a goalmouth scramble.

With Dungiven tiring, Lavey began to put scores on the board to emphasis their dominance.

Calum Murray latched onto a high ball from midfielder Crawford, flicking to the net before Fintan Bradley – whose influence grew steadily as the game progressed – raced through to finish low past the St Canice’s goalkeeper, effectively ending the game as a contest midway through the second half.

A series of points from full forward Duggan (3) and full back Mulholland (1) brought the game to an inevitable conclusion, JJ Cleary’s final whistle signalling Lavey’s first league win of the new season.