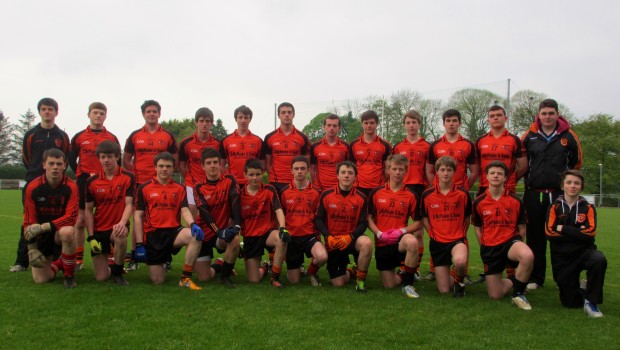 Second half blitz blows away the ‘Bridge

Whatever Shorty said at half time, it worked.

A devastating nine minute spell at the start of the second half saw Lavey register 1-04 without reply, and get the weekend off to a bright start with a comfortable victory over Newbridge.

With the game postponed earlier in the week due to exam pressures, the first question asked of the Lavey lads in the opening 30 mins arose from the visitors decision to place their corner forward back in front of their own full back line. Defensively, it didn’t work out for Newbridge. It seldom does at this level.

However, even in the face of a barrage of brilliant points from Mattie Bradley, Newbridge were able to maintain a foothold in the game, capitalising on defensive mistakes, drawing fouls and hitting the game’s opening goal after 18 mins.

That scrambled strike brought the game level, and with their tails now up, Newbridge took the lead one minute later.

Lavey’s response came within two minutes. Eamon McGill again attacked at pace before a scuffed shot spilled lose to his midfielder partner Dara McPeake who tested the Quarry Road end rigging from close range. Bradley once again landed a beauty, before Newbridge’s continued accuracy from placed balls brought the sides level at half time, 1-06 each.

Intensity is a buzz word used often to describe games. In the second half, Lavey brought it. In spades. With Aidan Toner pushing a high line, Newbridge were penned back and powerless to prevent the onslaught to come. Danny Shaw signalled intent with the opening score of the second half after only 35 seconds.

Paul Tohill got on the end of a move which saw his scoring attempt fall short and into the waiting arms of Mattie Bradley who netted in style. Toner then slipped in McGill to commence a rapid point scoring spree – Duggan and McPeake adding to their tallies within a further ninety seconds.

By the time the visitors registered their first score of the second half on 40 mins, Lavey had already amassed what looking like a 2-point securing tally.

Substitute Hugh McGurk kept the scoreboard ticking over before Danny Shaw pounced on a blocked effort from Mattie Bradley to drill to the net. Double scores and game over.

Shaw scored his second and Lavey’s fourth goal with five minutes remaining, and after Lavey ran their bench, Conor Mulholland stepped up from full back for the last kick of the game, sending a 45m free handsomely between the posts.