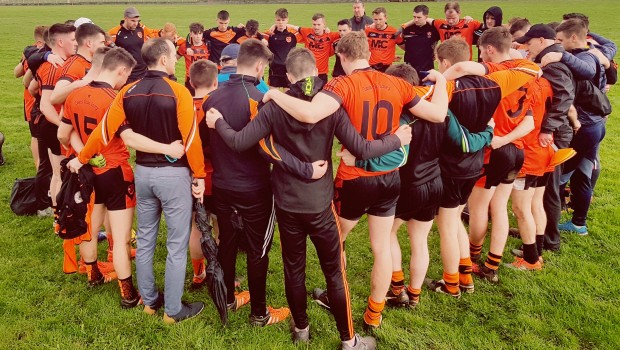 Wayward second half shooting saw a heavily depleted Lavey fall to their first defeat of the season in a keenly contested game at Kilrea.

Playing with five enforced changes due to injury following last week’s win over Swatragh, and a brisk breeze in the first half, the away team gradually got on top following an even opening quarter. Points from Liam Murphy, Declan Hughes and the accuracy of Thomas Donnelly from placed balls saw the sides level midway through the first half.

Lavey then enjoyed their best spell of the game registering 1-02 without reply, the goal coming thanks to a deft finish by Liam Murphy, clipping the ball ‘soccer style’ over the advancing Kilrea goalkeeper.

Lavey’s five point lead at the interval could, and should have been greater, but was gradually reduced with a series of scores from the boot of James Kielt and substitute Benny Quigg. A series of missed opportunities, eight in all, against the breeze meant Kilrea would eventually take the lead as the game entered the final quarter. A second yellow card for midfielder Damian Chivers had left Lavey down to 14 men for the final 20 mins, as the home took a three point lead. A terrific point by raiding corner back Colm Murphy threatened a resurgence. However, one more solitary long range free from goalkeeper Ciaron O’Boyle was all Lavey could register as Kilrea held out for a one point win.