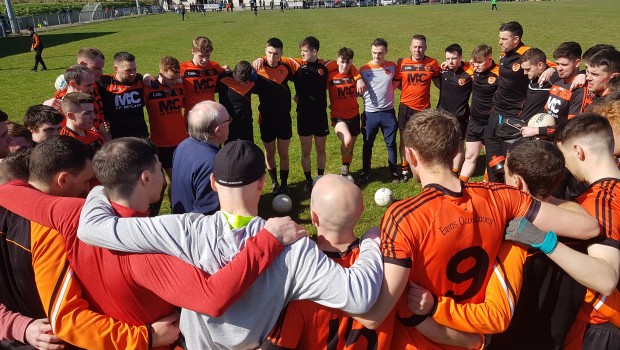 Lavey produce blistering second half to claim points at Glenullin

Lavey produced a blistering second half performance to come from a five point half time deficit (1-10 to 1-05) to claim victory at Glenullin.

Nine unanswered points, four of which came from the boot of substitute Thomas Donnelly, saw this game turned on its head as Lavey got to grips with a Glenullin side that had threatened to claim both points first half.

The opening stages of the game saw an even contest develop. Points from Declan Hughes and an Anthony McGurk free came after Kevin O’Neill hit the Glenullin net after good work by Hughes.

The goal proved somewhat of a lifeline for Lavey as Glenullin scored heavily at other end, amassing a seven point lead after 25mins. Lavey rallied briefly before half time with the raiding Hugh McGurk and Liam Murphy grabbing points to keep the away team within touching distance.

Substitutes Brendan Laverty and Thomas Donnelly had an immediate impact second half as Lavey dominated the Glenullin kickout to register a succession of scores. Kevin O’Neill added to his goal with two well taken points before Declan Hughes and Hugh McGurk added further scores from play. With Glenullin reduced to 14 men following two yellow cards for centre half back John O’Kane, Lavey were able to dominate possession, with Glenullin getting their only score of the second half with five mins remaining. However, Lavey never looked like conceding a goal and maintained their four point cushion to collect the two points with scores from play and frees by Thomas Donnelly.